Another year, another Motor City Comic Con in the books. This year may have been the biggest year yet, as celebrities from some of the biggest franchises all appeared for this year’s show. The show ran from Friday May 19th, through Sunday the 22nd and there was plenty of action to take in. The Motor City Comic Con is surely one of my favorite shows of the year, because it balances panels and contests with a solid amount of celebrity guests. The Suburban Showplace of Novi was rocking with first time attendees, and veterans alike. Check out the highlights from this year’s show!

Friday was a bit of an odd day for me, as I was one member less. Maria wasn’t able to attend the first day, so I took on the con by myself. I arrived at the Showplace around 11 AM so I could pick up my press pass, and get better seating for the press event scheduled. I got to the press room and actually snagged excellent seats for a double header press conference featuring Michael Rooker, and then a reunion of the cast of Weird Science (the movie, not the tv series). If I’m being completely honest, I had no intention of sticking around for the Weird Science panel, but I was all in on Rooker. He’d just starred in one of Marvel’s best movies to date, and had a few very memorable lines in the film. Additionally, Rooker is known to be the perfect blend of charismatic and maniacal, so of course I’d want to take part.

Saturday, I was joined by the full crew, and we set out to do what we do best: Cosplay. Maria and I reprised our King Ezekiel and Shiva costumes, while Jr went as Maui from Moana. Everything seemed to click, and most attendees we came across really seemed to enjoy the blending of genres. Although, had we thought it through, making Jr Ezekiel’s main guard Jerry would’ve been an amazingly awesome alt cosplay. Either way, we got to interact with a ton of people both in and out of costume, in what tend to be my favorite piece of any con. People who are complete strangers are able to let their guards down, and set their beliefs aside, and simply nerd out over mutually liked fandoms. We had the chance to chat with The Walking Dead star Khary Payton, who was a very genuinely nice, and highly enthusiastic person. Dude was a ball of energy and positivity, and he assured us season 8 will kick ass (We’ll hold you to that one Khary)! The rest of Saturday was spent hanging with other cosplayers and making laps around the con. It was incredible seeing Jr go from being super shy and reserved, to breaking completely out of his shell and absolutely soaking up all the attention. He had dressed up as Maui and initially had a bit of reservation about walking around with his shirt off. Within 10 minutes he had abandoned all shame, and turned into a miniature Demi-God of the wind and sea. 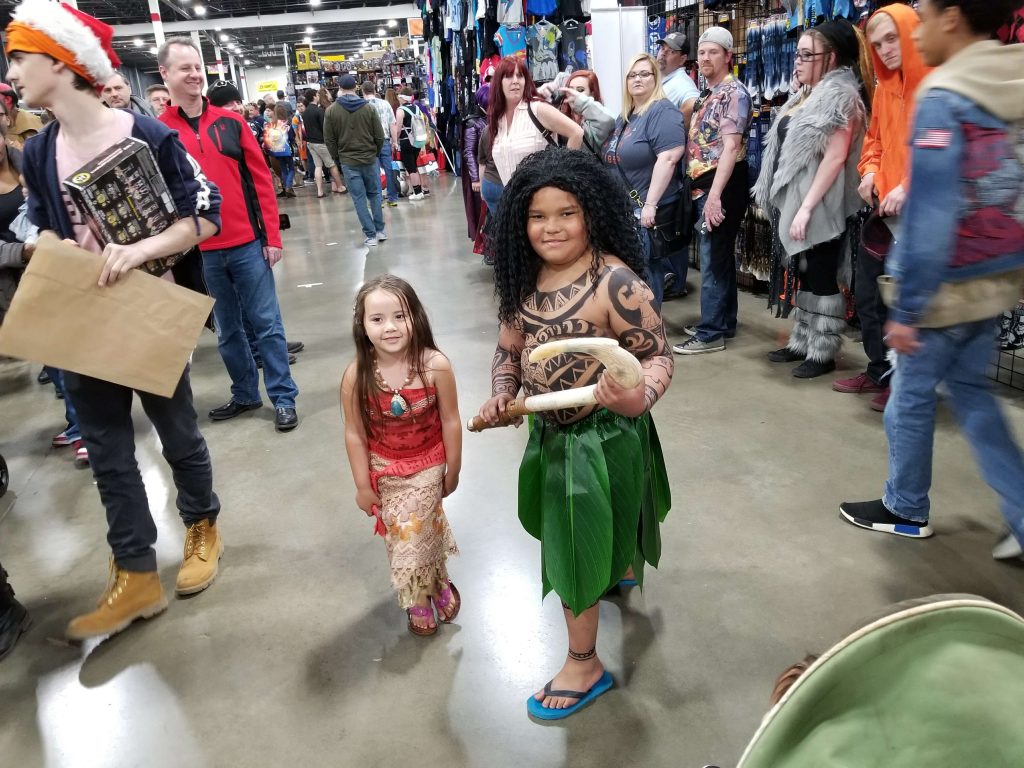 Sunday is typically kids day at Motor City Comic Con, and as such there’s a huge shift in attendees. There’s usually less cosplaying adults, and more parents hanging out with their kids and bonding over all sorts of nerdom. The kids costume contest is also typically held on Sunday, which means there is an abundance of cute at every turn. Maria and I opted to skip the costume contest in favor of a Will Wheaton panel. Will Wheaton spoke on a range of topics including his time on Star Trek as Wesley Crusher, and his battle with depression. It was great to hear someone speak so openly and honestly about their battles with mental health. I would encourage any and everyone to check out his blog and follow him on Twitter.

Overall, the 2017 Motor City Comic Con was yet another stellar addition and continues to grow with each edition. If there’s any hesitation to attend, let me put you on notice: Motor City Comic Con is becoming a can’t miss event. It’s fun, family friendly, and surrounded by great sights, shopping, and food. Motor City Comic Con has certainly earned a spot as one of my favorite cons, and if you ever get the chance to, you should check it out.