The annual C2E2 Comic Con was held at the McCormick Place Convention Center this past weekend. My wife Maria and I made the trip down to Chicago to take in the sights and sounds that are attracted to Chicago during the con. Scores of comic book and pop culture fans pack the McCormick Place to check out the media guests, rare collectibles, and unique cosplay on display. The event runs three days, with dozens of panels and signings to take part in. We had a few specific goals in mind, and wanted to partake in as much con madness as we could.

We arrived later than usual on Friday, to find the city already abuzz with excitement for C2E2. We had booked a room in the Blackstone Renaissance, a hotel with an old school design and moderately updated interior. We’d made the decision to drop all our stuff at our room and then catch a shuttle to the McCormick Place convention center, and we did just that. Once we arrived, the rush of excitement from attending a comic con began to set in on both Maria and I, and we were super ready to partake. We took extra care to plan out the entire weekend, and everything would work out perfectly as it usually does. Then we remembered, this is us we’re talking about here…NOTHING ever work out perfectly.

Be that as it may, we spent a great deal walking around, snapping photos pf cosplayers and checking out potential purchases when it hit us. WE FORGOT MARIA’S comics at our hotel. See, the biggest reason we made such a stellar effort to attend C2E2 this year, was to meet one of mine and Maria’s comic heroes: Mr. Stan Lee. Not only were we planning to meet him, but we also wanted him to sign a special variant of The Amazing Spiderman. A J Scott Campbell cover, with Peter and Mary Jane being married, and Stan Lee officiating the wedding. We still got a sweet Stan Lee featured comic signed by the man himself though, and that just made Maria’s day. As fate would have it, we ended up passing the Skybound table, and they had a replica of Lucille which I also added to my collection. The con was off to a great start. 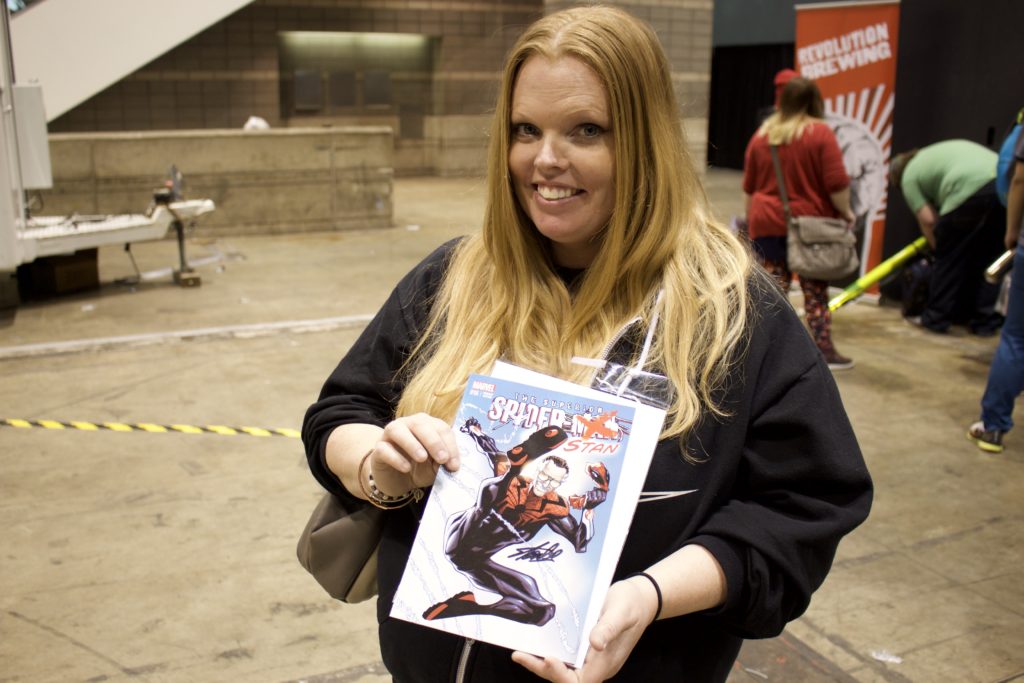 Day two of C2E2 was upon us, and we decided to hit up Peet’s Coffee  for some early morning fuel. It was at this moment, the good fortune that was shining down on us, began to fade. We came to the realization that we had forgotten a pretty important piece of our cosplay at home. We were cosplaying as Ezekiel and Shiva from The Walking Dead, and we left Shiva’s chain all the way back in Michigan. We made due with what we had, but the cosplay still felt a bit off. We made our way into the convention and we had an immediate hilarious epiphany. Either people would immediately know who and what we were doing, or they’d assume I was playing a homeless guy and Maria would be mistaken as a furry. Thankfully, people recognized us, and it led to a ton of fun interactions with other attendees. It was hilarious seeing people react to it, and even more hilarious when people would say they wished my wife, a woman in tiger paint, would’ve eaten Negan instead of the nameless savior the actual CGI tiger had eaten in the show. The fandom was super real in Chicago, and we enjoyed soaking up all the praise.

While cosplaying was super fun, we did miss out on a few choice panels that happened that weekend. One of my favorite people (CM Punk) was in attendance, and did a short panel where he addressed MMA and his comic writing future. There was also a meet and greet with Luke Cage’s Michael Coltier and an awesome Lucha Underground panel.

Sunday was a bit of a bummer day, as it started off with Maria choosing to forgo her wickedly amazing Weeping Angel cosplay. Logistically, the costume would have been super hard to accommodate on our last day there, but I really wish she would’ve worn it. We actually ended up scooting out early on Sunday because we were all partied out, and were in desperate need of some sleep in our own bed.

C2E2 is always an incredible time, and if you ever get the chance to attend, I highly recommend it. It’s slowly becoming a regular in our comic con line-up.