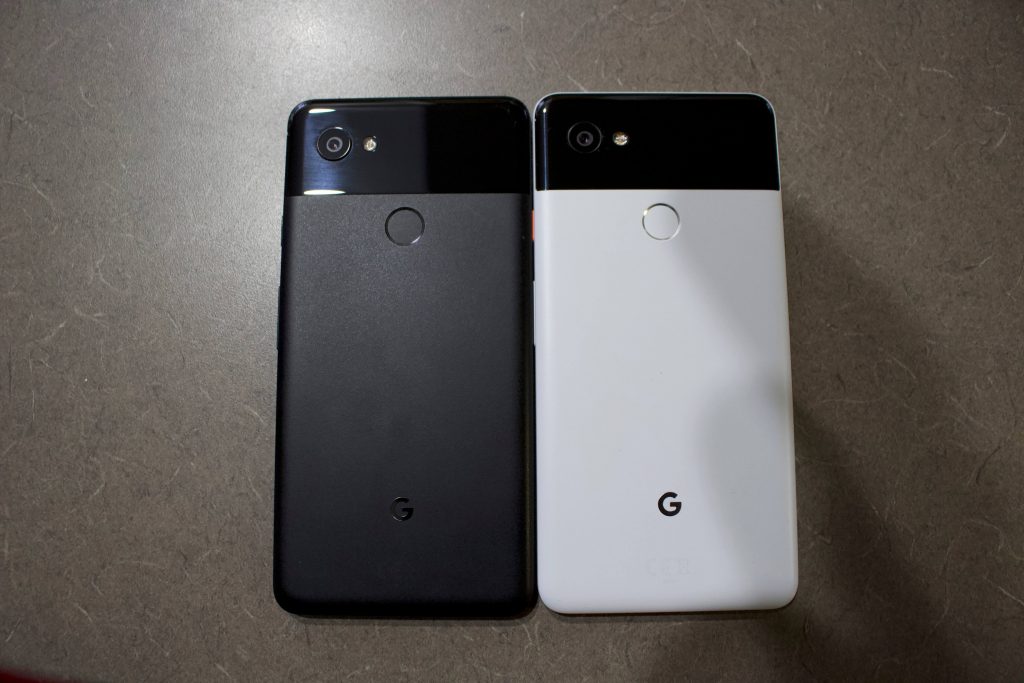 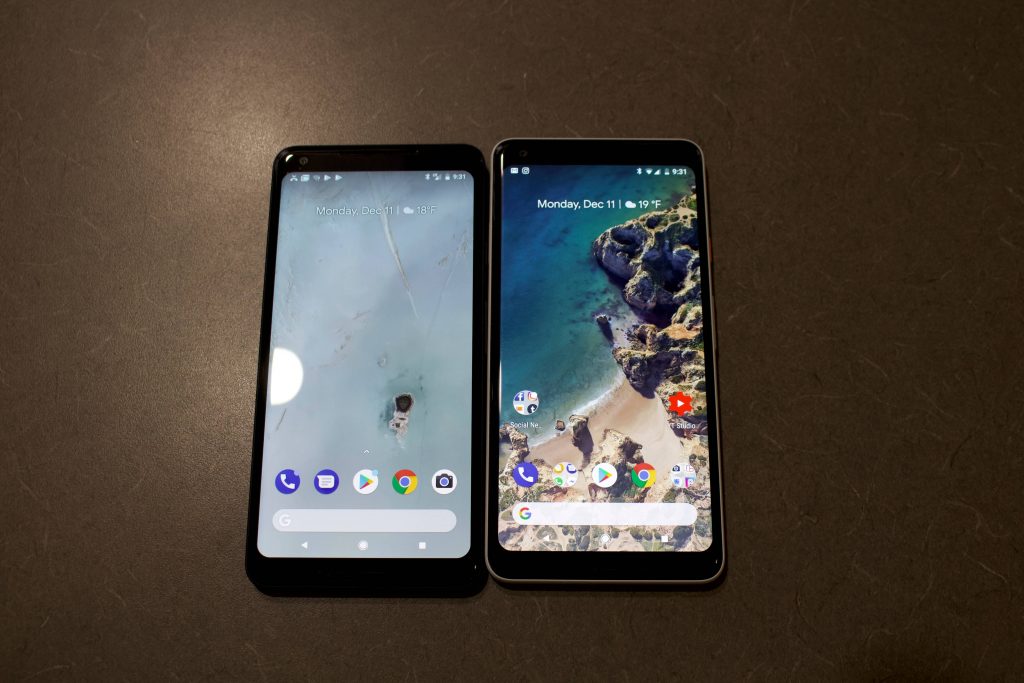 At first glance, it looks like Google went out of their way to make sure the Pixel 2 and Pixel 2 XL looked different. Boring is the last word I would use to describe these new devices. In fact, they look really space age, and something you’d totally expect from Google. The Pixel XL 2 is more of a distant cousin of the LG V30 as Google partnered with LG to design the bigger Pixel phone. The body of the device looks and feels like a plastic device, but believe it or not, it’s actually built with metal. What Google did was add a special coating to the back of the device in order to give it a less slippery feel. The screen around front is a large 6′ LG OLED panel, that extends almost edge to edge but not quite as much as Samsung’s Infinity display does. Hidden in the darkened glass panel are two speakers which bring stereo sound back to Google devices. Around back, Google retained that glass panel exclusive to their Pixel devices, and a single camera sensor. 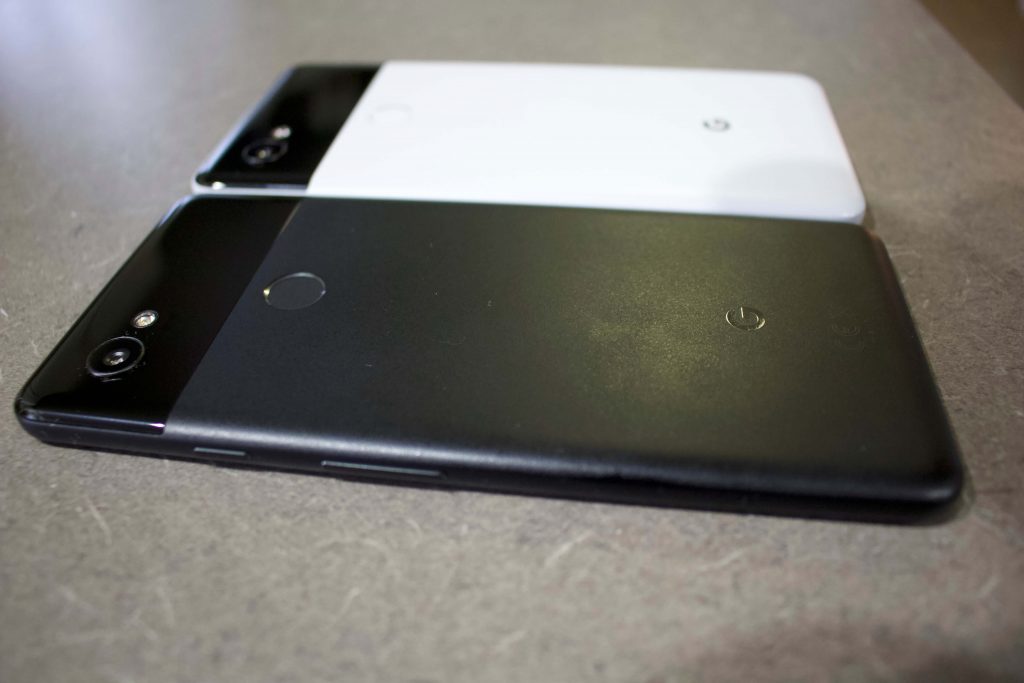 Both Pixel models are nearly identical when it comes to tech specs. The only difference between the two would be the battery that keeps everything running. The Pixel has a 2,700 mAh battery inside, while the Pixel 2 XL rocks a 3,520 mAh battery. In regards to the processor and internal storage available, there’s honestly nothing groundbreaking here. Everything inside of the phone is pretty standard with flagship phones nowadays. There’s a Snapdragon 835 processor on the inside, alongside 4GB of RAM and either 64 or 128GB of internal storage. Both devices are also IP67 certified which means it’ll withstand water submersion up to 3 feet, for up to 30 minutes. We never got brave enough to fully submerge the phone, but it did stand up quite well in the middle of a wicked rain storm. 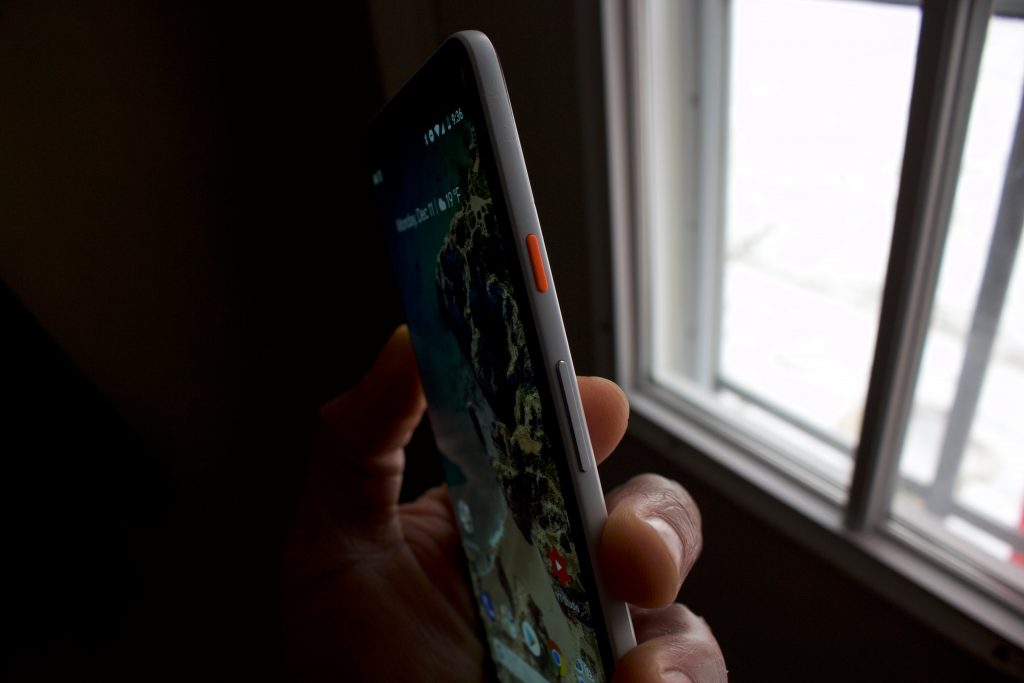 One thing that the original Pixel did very well, was integrate the hardware and software into one excellent experience for the user. With the Pixel 2, Google has upped that experience, and brought the Google software to the forefront, making it the central experience here. With Android 8.0, Google is taking a step towards complete immersion in the Google ecosystem, making sure their services completely integrate with your everyday life. The Pixel 2 is hands down, the smartest device I’ve ever owned. This is partly due to the machine learning elements inside the device, making it smarter every day I use it.

The Google Assistant has also gotten smarter thanks to better ways to access it, and the addition of Google Lens. Google Lens is essentially a smart search feature, present within the Google Assistant and within Google Photos that executes a smart search based on text and landmarks found within a photo. Using Google Lens was pretty simple and straight-forward, although the accuracy was sometimes frustrating. Another addition to the Google Assistant is a new feature called ‘Now Playing.’ Now Playing essentially stays on in the background, listening for ambient music and when it finds a sound, it’ll display the song info on your lock screen. From there, you can open the song within your music app of choice, and add it to a playlist, or purchase it. There’s also a new ‘Active Edge’ feature that allows you to squeeze the sides of the phone to launch the Google Assistant. Honestly I found this more convenient than using the ‘OK Google’ hot phrase, and more fluid as there was no awkward delay between the time I hit the sides and the time it was listening for me to speak.

Last year, Google turned mobile photography on its head with the camera inside the Pixel. This year, they look poised to do the same thing, but this time with software that aids the processing of the photos you take. It’s called the Pixel Visual Core, and it’s a powerful piece of hardware. Google put a second custom new SoC inside the Pixel 2 and its sole purpose is to allow for 3rd Party Apps to access the Pixel’s HDR+ photo Processing. This solves one of the biggest problems of using 3rd Party Photo apps (snapchat, Instagram, VSCO Cam) on Android. Thanks to the custom SoC, these apps will be able to take photos as good as the stock Google camera.

The stock camera by the way, is the best camera available right now. Better than the Galaxy S8, better than the Note 8, better than the iPhone X, it sits alone at the top of the mountain. Photos can be taken in great, or less than ideal conditions and still turn out good. There’s a 12MP camera on the back, and an 8MP shooter around front for selfies. Both cameras performed above average and didn’t suffer from the usual smartphone gaffes like over saturation, or granulation. Google introduced their portrait mode with the Pixel 2, and it’s capable of some truly incredible shots. I was impressed by how accurate the results were. Given how most of the effect is applied on the backend thanks to the software, there wasn’t as much over-blur as I’d expected. Recording video was also pretty amazing thanks to the new stabilization added. I could see small traces of shake, but for the most part, everything looked solid.

Google managed to knock it out the park with the Pixel 2. Everything about this phone work well. Despite some early controversies about the quality of the display, Google has seemingly pushed past it, and churned out the best smartphone of the year. Both models are very well-built, and although they may not have the cutting edge looks of the Essential phone, or the Galaxy S8, they soar above and beyond in the category of performance. The price tag is a mightily high one, but in my opinion it’s well worth the ask. You can pick one up right now from the Google Play Store, or from the exclusive wireless partner, Verizon. 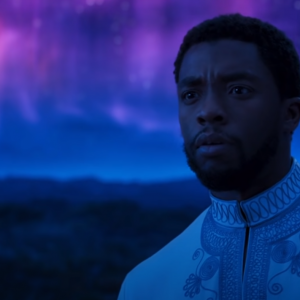 During their investor event today, Disney announced a plethora of new projects and gave more details on franchises that are already being developed. One of

Disney announced today that a film featuring the first family of Marvel will soon be in development. Yes, finally Marvel will be producing a Fantastic 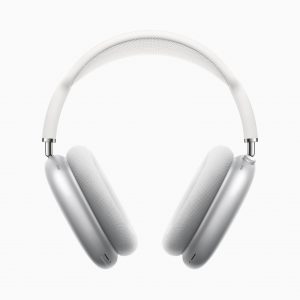 As if you didn’t already have enough Apple gear to add to your Christmas list, Apple has gone and given us another thing to buy. 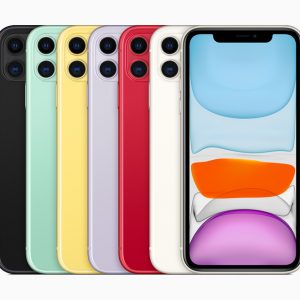 Apple is rolling out a new repair program for select iPhone 11 models that may be defective. Users with affected models will experience a sudden