The Samsung Galaxy Note 8 represents a fresh start for Samsung and the future of their flagship phablet. The Note 7 launch went up in flames (literally) after severe quality control issues forced Samsung to pull the phone from shelves well before sales really took off. Because of that, Samsung faced constant media scrutiny and a smeared reputation in the eyes of their most loyal customers. Most of those who purchased a Note 7 ended up being forced into the arms of Samsung’s fiercest rival, inadvertently becoming an advertisement for the iPhone 7 Plus. Now, after restructuring their design teams, and focusing more on user experience, Samsung is betting on the success of the Note 8. This phone could not only resurrect the Note line, but it may end up being the best phone they’ve ever made.

The Galaxy Note 8 is the best designed Galaxy phone ever. The size of the phone is perfect, and Samsung’s Infinity Display completely draws you in to the phone. The Note is wider than the Galaxy S8+ and as a result, feels more like the phone Samsung intended for you to buy. The panel is a full 6.3′ and extends around almost the entirety of the front of the phone. Samsung employed their curved edge design on both the front and back of the device, which in turn makes the phone feel much more comfortable in your hand. It is a bit tall too though, which makes reaching from one end of the display to the other, a real challenge.

In addition to being the best looking phone Samsung has ever made, the Note 8 is also the most powerful. Samsung stuffed a 2.3 GHz Octa-core Exynos processor, 6GB of RAM and 64GB of internal storage into this unit. Using it for the better part of a month, I can say I NEVER noticed any sort of lag, stutter, or latency in anything I did. In short, it’s screaming fast, and can handle anything you plan on tossing at it. We used a Verizon Wireless review unit, and their LTE network was blazing fast on the Note 8. Games would run butter smooth, and unlike other smartphones, the battery inside the Note is a technical marvel. Samsung lists the battery inside the Note at 3300 mAh, but you’d swear it’s more than that. I powered through a whole Sunday streaming an NFL game in its entirety, shared things through social media and texts, and took a few calls, and was still able to finish the night with around 30% battery left. 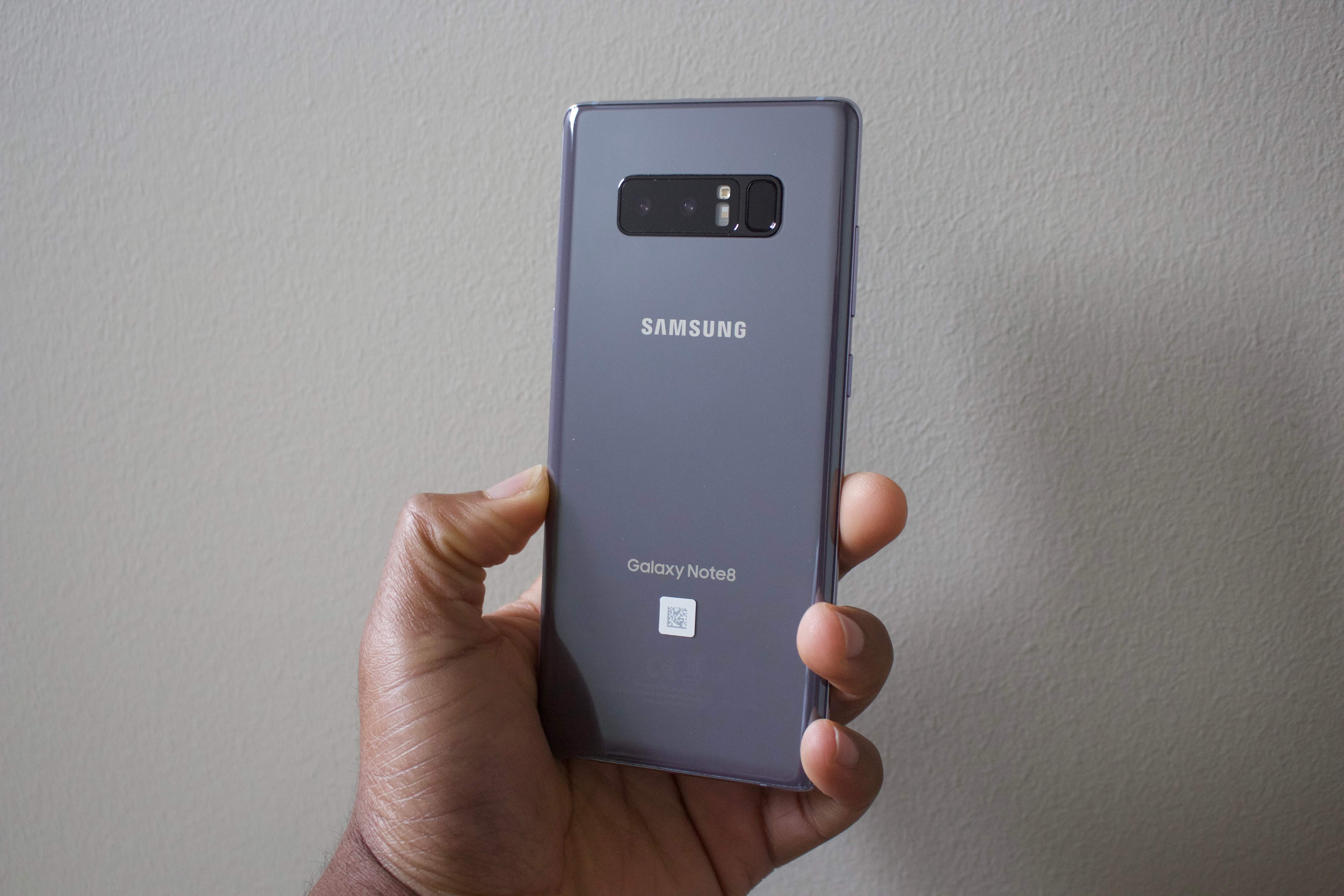 Let’s talk about the real reason everyone is here: the camera. With the Note 7, the camera experience was great, but we didn’t get to see exactly how great due to the recall. While their devices last year took great photos, the iPhone 7 Plus and Google’s Pixel stole all the spotlight. This year, Samsung is going for the crown, and the Note is more than up to the task. The Note 8 rocks a stellar dual 12MP camera layout on the back, and an 8MP selfie camera. One of the cameras on the back is a Dual Pixel wide-angle camera, while the other one is a telephoto lens allows for better distance photography. Both cameras performed exceptionally well, especially in low light. Older Samsung phones used a feature called ‘Selective Focus’ which would allow for a bokeh-like effect. With the Note 8, Samsung improved upon Selective Focus, with something they’ve dubbed ‘Live Focus.’ Live Focus essentially does the same thing, but with much better results. Most of the photos I took while using Live Focus turned out awesome, some of them were ruined by what I could only describe as ‘over-blur.’

The camera on the Note 8 is top-notch, and is definitely one of the best experiences available. I don’t think it will be as good as what Apple will have on the iPhone X, and Google’s Pixel 2 is already being crowned king again, but it’s still great nonetheless.

Another big improvement Samsung made with the Note 8, was with the S Pen that comes included. The S Pen is getting closer and closer to blurring the line between the digital and physical pen and paper experience. There’s very little latency here, and the S Pen can be surprisingly accurate at times. I wouldn’t say it’s as accurate as the Apple Pencil, but it’s definitely up there. Samsung also built an extra gasket into the S Pen slot to make it virtually impossible to put the Pen in backwards, which apparently was a thing.

All in all, the Samsung Galaxy Note 8 is going to be one of the best phones of the year. Samsung knocked it out of the park with the design, hardware, and user experience on the Note. If you’re not yet sold on the pure Google experience that the Pixel offers, and not ready or willing to jump into the iPhone side of things, then the Note 8 is the way to go.