I have long professed my love for pure Android devices. Ever since the very first Nexus, I have been borderline obsessed with Google’s flagship phones. Once the Nexus brand was killed off and Google introduced the world to the Pixel brand, I fell even harder. After all, the Pixel represented the new standard for what Google wanted to accomplish with the right software and hardware on a device. Thankfully, it wasn’t just an ideal, as Google was able to execute and deliver a near perfect device to the Android faithful who were looking for a high-end Android experience without carrier or manufacturer bloat. Three years in, and Google has just released their most ambitious handset yet, with the Google Pixel XL 3. Rocking some all-new design cues and software enhancements, Google is looking to expand what we ask for out of our smartphones. But will they actually execute?

Let’s get this out the way right now: The Pixel 3/ Pixel 3 XL will not sway you with a mind-blowing design. Simplicity is key here, and if you plan on buying a new Pixel, just know that there are several better looking phones on the market. In fact, if I had to use one word to describe the design on the Pixel 3, I’d have to use Vanilla. The look of the phone is about as bland as they come, lacking any radical risks in the appearance department. I opted to go for the “Clearly White” model because a) I had the Black and White Pixel 2, and b) the Mint Green power button did look pretty cool. Outside of that the phone looks like a high-tech bar of soap. The back of the device still has that matte look and feel, and still has a small glass pane towards the top of the phone, near the camera assembly. On the front of the phone lies two of the Google’s biggest missteps while designing this phone. The first being the insanely (maybe not that insane) large bezels on the smaller Pixel 3, and the other being the gnarly chin on the bottom of the Pixel 3 XL. Bezels and chunky chins were justifiably left behind in 2016 and I seriously wish Google got the memo on this. I’ve read several reviews about the Pixel XL 3 and people seem to have a big issue with the notch on the front of the phone. Personally I don’t, and it actually looks like it’s really not much larger than the notch on the iPhone X, XS, and XS Max. 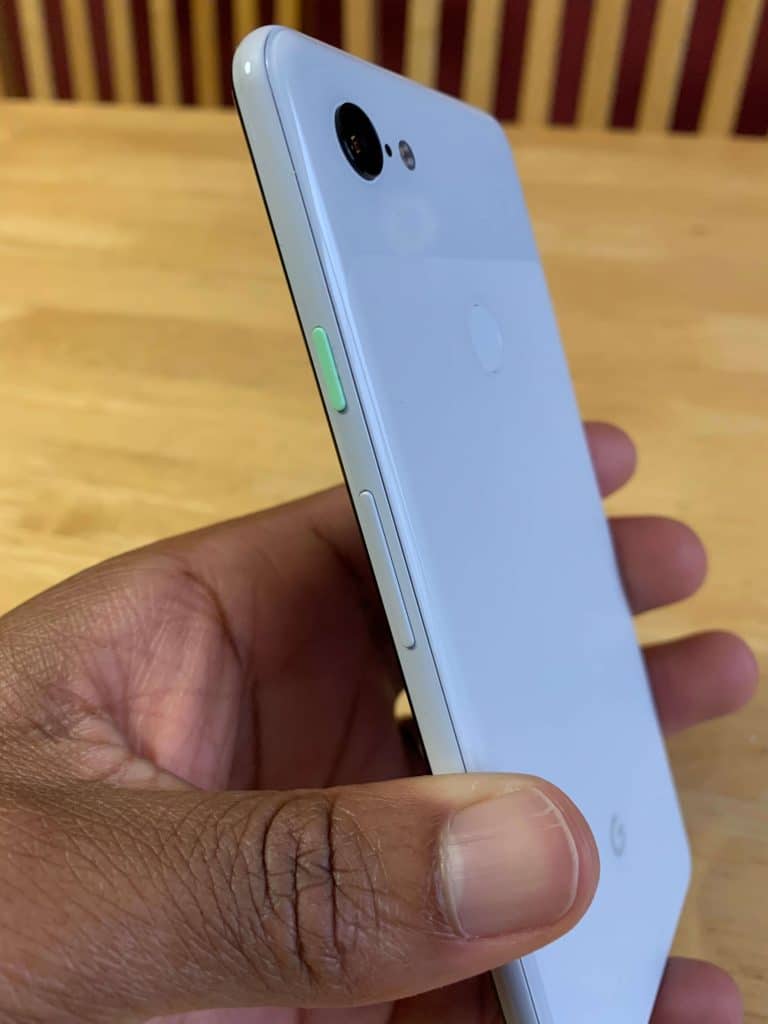 The software on the Pixel 3 is BY FAR one of the best things about using it. Google really dug deep to further integrate the Google assistant into your phone to help you get more things done with less work. It also adds some really awesome camera tricks, and overall functionality to ensure that the Pixel works like more than just a smartphone. I really love the fact that as I use my phone, it learns the who, what, where, when, why and hows of my life and helps make things that much simpler. Automatic traffic updates before I begin my commute to work, recaps and highlights from my favorite sports teams, and recommended new articles delivered to my device daily. The best thing about Google’s curated content, is that it’s all based off of things I natively search for. So essentially I’ll see the things I’m most interested in, majority of the time. The Google Assistant has gotten much smarter along the way as well. It’s evolved beyond the point of a simple party favor, and more into an actual assistant. You can now use the assistant to more accurately identify ambient music playing in the background, set a bedtime routine for you, or call the nearest bakery. Perhaps the neatest thing the Google Assistant does now is the new “Call Screening” feature. Google introduced this feature to help fight the overwhelming amount of robocalls we all experience each and everyday. The unique thing is, this is something that could become even more useful for generally everybody as time passes. Using it is a very simple process that allows users to press a ‘screen call’ dialogue while getting a call, and Google’s AI will take over, Callers are met with a prompt telling them to leave a short message about why they’re calling. From there, users can choose to ask for more information, let the caller know that they’re busy, or they can flag the call as spam, all without ever answering the phone. Brilliant play, Google. 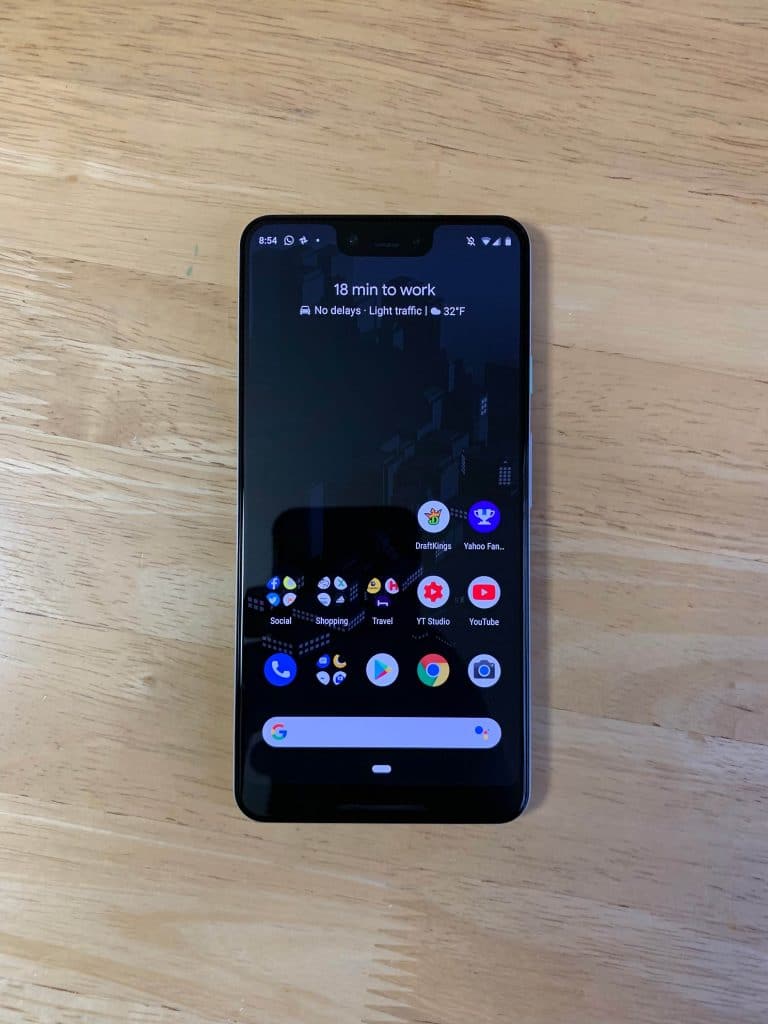 As we all know, a complete experience doesn’t just revolve around software. The hardware has to be good enough to complement the advanced software features, otherwise the experience just falls flat. There’s been a ton of debate around just how good the hardware is on the Pixel 3, and I have a simple answer for you; it’s good enough. The processor and RAM inside the Pixel 3 are reminiscent of flagship hardware from a year ago, but it impressively holds up in this current day smartphone. Powered by a 2.5GHz Octacore Snapdragon 845 processor, 4GB of RAM and 64 or 128GB of storage capacity, the Pixel 3 is still as snappy as any other flagship phone today. The Pixel 3 XL also rocks some of the loudest front firing stereo speakers I’ve ever used on a smartphone. In fact, they are so loud, they can cause a bit of vibration on your device when listening to music or audio from movies. The smaller Pixel 3 rocks a 2,915 mAh battery, while the larger Pixel 3 XL has a 3,430 mAh battery. Both phones have above average battery life, but the addition of fast charging helps if you happen to be an above average user. Google also (finally) implemented wireless charging with the new Pixels and it works with all Qi wireless chargers. One HUGE disappointment though, is that Google has disabled wireless fast charging on anything but their Google Stand wireless charger. Not cool, Google. 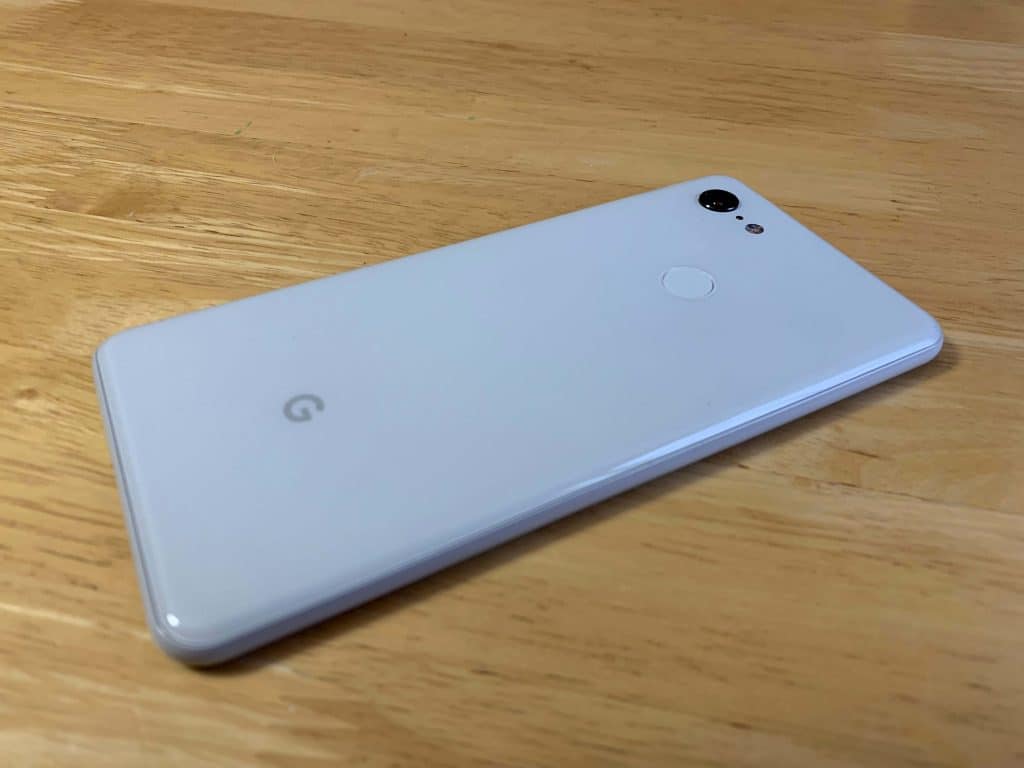 The Pixel brand is best known for its insanely stellar camera quality. I’m very glad to say that tradition has continued, and the Pixel 3 has the best smartphone camera experience you can get. This is accomplished by a clever mix of a great camera sensor, and Google’s SoC working together to ensure you get the best possible picture every time. There’s also a few new features within the camera that tremendously improve the photo experience without requiring extensive photography expertise. One of which is the new “Top Shot” feature which lets your camera snap a series of photos (thanks to Google’s Motion Mode) and lets users skim through a series of shots and pick out the best image. This can be used to correct someone who closed their eyes, or a random object blowing into frame, before the shutter was activated. Another new feature is something insanely cool called “Night Sight.” Night Sight ends the “low-light” performance competition once and for all, as the Pixel is capable of making shots taken in dark conditions look like a well-lit scene. The Pixel has a really unique take on selfies as well, as Google put two sensors on the front of the phone in a time where most other manufacturers are putting dual, triple and quadruple, sensors on the rear of their devices. The dual front facing cameras take excellent photos as well, but the actual reason behind the dual camera system is actually more practical than you think. The Pixel camera engineers know what a pain point fitting groups into a selfie could be, so they simply placed a wide-angle camera on the front of the device to allow for super wide-angle selfies. Now you can get the whole fam in one shot without needing arms like Manute Bol (Google it, kids).

So after all this, the question remains; how do I really feel about the Pixel 3 XL. The answer is great. I think it’s a great successor to the Pixel 2 and original Pixel, and doesn’t feel like a slight incremental upgrade. Nearly every gripe or slight concern from the previous model has been addressed, upgraded, and enhanced. Is the Pixel 3 XL the best phone on the market? Probably not, there are certainly more powerful phones out there for gamers, video recording in a word is shoddy, and again the design is definitely boring. With all that being said, this is still one of the best phones out, and if you’re a photography buff, then you most certainly won’t want to skip past this one.